December 16, 2010 in Uncategorized by pornochio | 2 comments 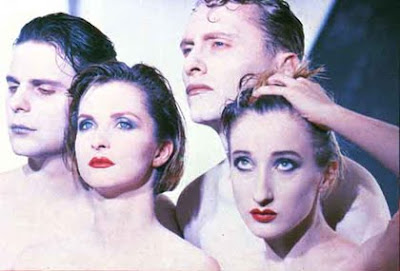 In 1985, i hated ZTT’s Propaganda. Even if the band was founded by an ex Die Krupps, they sound too cheesy for my delicate young ears, too much “flute de pan”, a bad new wave in between Yena & Sandra. Bullshit, i was just a cunt: this Frozen Faces is a pure pop song of modern times, a b-side but flirting with perfection (these two melodies, this sexy mix of german & english language….). The second part of the song makes me now dancing and crying in the same second. Do we get sensitive when we get old?

The “echo” version (in fact an 10 minutes extended version drowned under a cascade of good saxo – it’s not so often) was produced by ex NME journalist Paul Morley – and it’s simply a present of GOD for balearic people like you and me.
Forget the world, take this break – and dance.