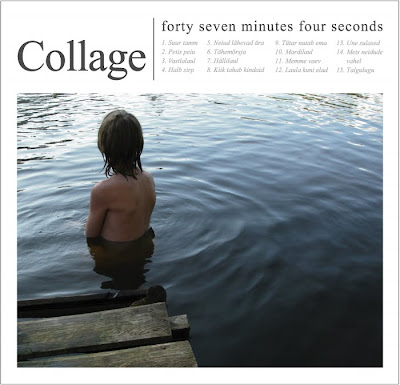 Correct me if I’m wrong but I’m guessing the late 60’s Estonian jazz pop folk section in your collection is pretty small? Well it’s time to change all that with this inspired re-issue from Wool Recordings of the genre fusing group of students known as Collage.

The group was formed by Ravio Dikson who recruited students from the Talinn conservatory and school of music. The name Collage was suggested by one of the group because it’s repertoire included jazz, pop, classical and, thanks to a commission from Estonian TV requesting music for an ethnographic program, Estonian folk.

Luckily Estonia’s geographical position on the edge of the Soviet Union allowed the musically interested to watch Finnish TV with its diverse music programs and radio stations with more varied playlists to the limited output of their Estonian counterparts were also within range. These two factors coupled with the rare lps brought back by travelling musicians meant influences as wide ranging as Les Double Six De Paris, Quincy Jones and Michael Legrand were all soaked up by the students and the lack of any international authors rights organisation in the USSR meant not only were tracks used as inspiration but also covered without the hassle of legal challenges or the inconvenience of having to pay the composers and money!

The album kicks off with the upbeat Estonian pop of ‘Suur Tamm’ before dipping into jazzier territory with ‘Petis Peiu’ where Estonian lyricism meets bossa nova and some inspired scatting from the female vocalist. Most of the tracks on the album contain vocals and even male barber shop style harmonising appears on several tracks. I’m particularly liking the great ethereal folk vocals on the gentle, soothing ‘Hallilaul’ which is the audio equivalent of a head massage.

Funk drums and guitar provide the backdrop for some amazing female vocal interplay on ‘Ehted Kadunud’. Great jazzy Hammond organ and more Brasilian vocal stylings, this time male, appear on the warm sounds of ‘Memme Vaev’ and ‘Laula Kuni Elad’ can only be described as Estonian folk blues fusion.

This is a really intriguing album from start to finish and a wonderful fusion of styles carefully stitched together by a bunch of Estonian students thirty-three years ago. I’m just hoping the other two albums they recorded are as good and see the light of day.