January 9, 2008 in Uncategorized by karine charpentier | No comments 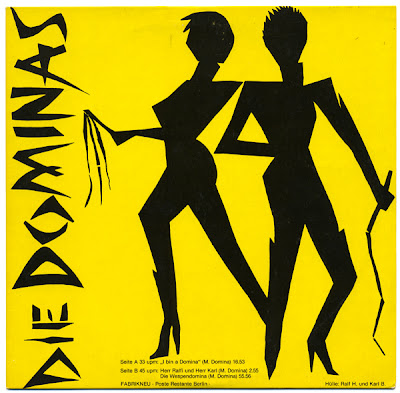 ” ‘Die Dominas‘ were two old friends of mine. They are my long time friend Rosi, who also performed on some Ash Ra Tempel records (…) and Claudia Skoda for whose fashion shows I have been composing and performing most of the music since 1976. They knew KW from Düsseldorf because they often went there together for fashion fairs. Ralf H. and Karl B. wrote down two special chords for them on a piece of paper: the ‘sub Domina’ and the ‘Domina seven’ (Domina = dominant) chords. Later in Berlin they were asking me to show them how these chords sounded. So, one evening when we were doing a nice long session together in my studio, I played them these chords. I explained a little about the instruments in the studio, and they started experimenting with them, without knowing that I was already recording the session! It was really a hilarious session, and the voices sounded like we were having a party. The next day, I started re-mixing the material, and finally got three titles out of it! Claudia and Rosi were so impressed with the result they played it to Ralf and Karl. They were so taken by the recording they offered to make the cover for the album. It turned out to be a very nice cover that looked like a silhouette in black and yellow. ” Manuel Göttsching