February 8, 2008 in Uncategorized by guillermo | No comments 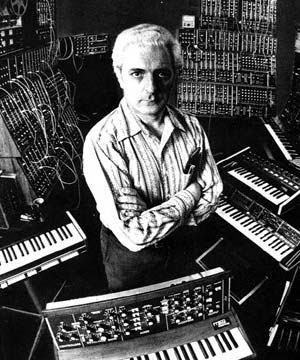 What type of music were you into when you were a child, before thinking of building synthetizers ?
Up to the age of 14, I took classical piano lessons. I practiced for several hours a day. That was the only music that I was ‘into’. We did not have a phonograph in our house, and I did not listen to the radio that much. When I had spare time, I preferred to work on my electronic hobby projects.

What pushed you into ‘electronic synthetizers’ ? Did you expect this huge success ?
I met a composer (Herbert Deutsch) who asked me to help him to produce new electronic sounds. We worked together out of our fascination with what each other was able to do. There was no money, no funding, and certainly no idea that it would lead to a business activity. We were just having fun by doing something interesting.

Who were the first musicians who tried the moog ? what were their feedback ?
My first synthesizer customer was Alwin Nikolais. He was a choreographer, and he composed the sound scores for his dances on tape. My second customer was Eric Siday, a producer of sound logos and musicfor radio and television commercials. Both of these people gave me a lot of good ideas about new modules to design, ways to arrange the patching, etc. I think that my third customer was Vladimir Ussachevsky, who was then the director of the Columbia Princeton Electronic Music Center. It was Ussachevsky who gave me the idea of the envelope follower and the four-part (ADSR) envelope generator. After that I built instruments for many academic and experimental composers, but virtually nobody from the pop music field.

I met Theremin in Bourges in 1989. He was 93 years old at the time. He had been in Russia (the Soviet Union), without being able to leave his country, for fifty years, some of which he spent in prison. Much of his life during that period was just plain difficult. By the time I met him, his voice was very weak and it was hard for him to speak in English. On the other hand, he was like a god to me. I was happy just to be in his presence, watch his face, and listen as other people asked him questions.

What do you think of those young bands like ‘the moog cookbook’ who use your synths to make pop music ? do you agree when people talk about ‘kitsch’ to qualify theremin and moog synthetizers ?
The Moog Cookbook (Roger Manning and Brian Kehew) are really funny. They’re totally cool. They’re very good musicians, with a sharp sense of irony. I mean, they play the music of the seventies with ‘straight faces’, with subtle changes that point up the music’s underlying pomposity. When Brian Kehew and Roger Manning want to, they can be serious and impressive performers. But that’s not what the Moog Cookbook is about.

I admit that there is a lot of kitsch that uses the theremin and the synthesizer. There is also quite a bit of really good music, from the classical virtuosity of thereminist Clara Rockmore to the breathtaking bass lines and jazz licks of thereminist Pamelia Kurstin, to the keyboard genius of Jan Hammer and Keith Emerson. I don’t think that the theremin or the synthesizer should be qualified as ‘kitsch’. It has been used to produce a lot of kitsch, but so have the piano and the violin!

Do you think, like jean jacques perrey, that technology should serve popular culture ?
Of course. In fact, our current popular musical culture would absolutely not exist if it weren’t for technology.

Do you feel close to the work of people like raymond scott ?
Every experimental electronic composer does something that is his own. I feel close to the work of Raymond Scott and others like him because they connect with the medium of electronics in such creative ways. They are not my ways, but I am one who develops the medium, and that enables me to be a conduit through which creative musicians produce their music.

In france, people who make sound research – pierre henry for exemple – are often very serious, they don’t really care about the impact of their work on popular culture…
Whether or not you care about ‘the impact of your work on popular culture’ has nothing to do with which medium you are using. Most musicians want to be heard. They need to communicate what they feel. Whether you wish to communicate popular music or “serious” music has little to do with what medium you are using. After all, many of the most “serious” abstract paintings are painted with the same paints that conventional portraits and landscapes are painted with.

Samplers are very popular now, what do you think of this tool and the way people use it ?
Personally, I’m not very fond of samplers. To me, samples sound exactly like how plastic looks and feels, compared to wood. Samples are always the same, and that is very easy to hear. Furthermore, you get tired of hearing sounds that are exactly the same. So samples sound great for a while, then they get harder and harder to listen to. That’s what I think.

On the other hand, if I could keep my 68-year-old brain but once again be 15 years old, I would know how to talk to people (I’ve learned that much!). I would know how to pay the right kind of attention to girls so I was popular with them. But perhaps more important, I would have a better-developed sense of the universe, and of the ‘cosmic network’ that ties us all together and is the source of creativity. I would want to do research. I would want to understand the things that science has not yet been able to explain. I don’t know if either music or electronics would figure into this. Perhaps, – and perhaps not.