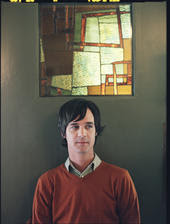 here are two extracts from one of the best movie soundtrack i’ve discovered in the pas months : “me and you and everyone we know” by michael andrews. i haven’t seen the movie but the soundtrack sounds like plone, gregory fleckner quintet, jeremy dower or early pram stuff. cody chesnutt and spiritualized are also appearing on the OST.

the guy has just released a beautiful solo album called “hand on string”, he also done the “donnie darko” soundtrack : follow him.